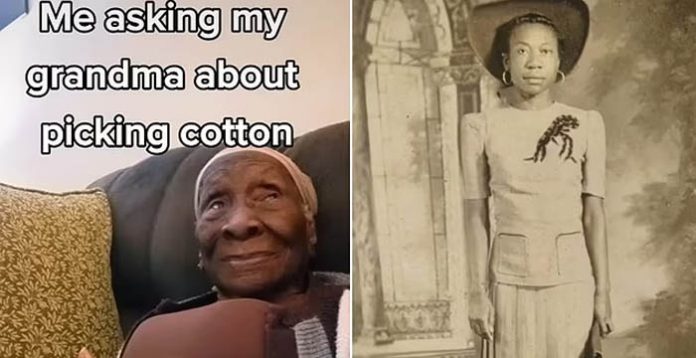 Madie Scott, a 103-year-old, won the internet by sharing her life story where she spoke about working for 14 hours every day picking cotton for a meagre payscale of 50 cents. Madie said that she started working at the age of 12 in Georgia, where she used to pick cotton.

When she was 16, she migrated to Florida to work as a sharecropper so that she could make more money. Sharecroppers rented tools from their landowners, who would demand a huge return of their crop. Madie recalled that she used to work from 3 in the morning to 5 in the evening.

For many years even after the Civil W-r in America, most Blacks in America used to work for white landlords as sharecroppers. They’d rent a small piece of land from the landlord and then work in that piece of land and return almost 50% of their earnings as rent.

They were required to purchase everything from their landlords including the tools for farming and basic necessities like food, for which they’d have to pay any amount that the landlord asked them. These Black people barely made any money, and most of them were in debt.

Madie worked as a sharecropper for some years and then went on to work as a cook. Eventually, she started working as a nanny for a rich family till she was in her 80s. She said that although she missed working, she was a little envious of today’s generation, who have it much easier than her.

The video was recorded by her granddaughter Shanika, who was raised by Madie after she lost her mom.

Ever since the video went viral on TikTok. Shanika said that we don’t often hear much about Black history but she put the video across on social media for people to see and acknowledge her grandmother and many others like that who worked towards building America.