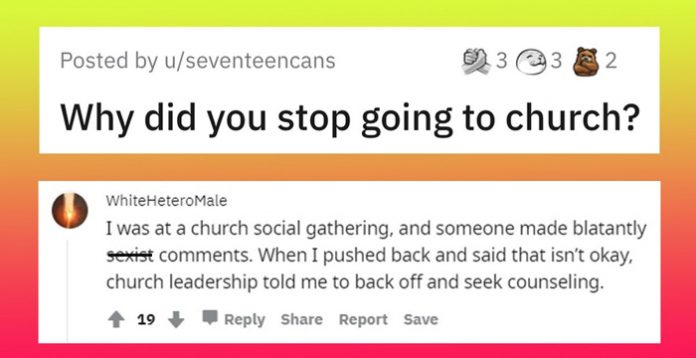 Over the years, the Christian churches have witnessed a sharp decline in the number of attendees. Many people have eventually reduced or opted out of attending Sunday services leaving many Christian leaders wo-ried about their source of income.

Recently one Reddit user randomly asked people to share the reason behind why they stopped going to church, and here are a few of their stories.

2) Another user said that he had moved to a new city to attend university.

He and his roommate were in search of a church, and at one of those churches they visited, the worship was very bois-erous, and he felt overwh-lmed and got a p-nic at-tack. He quickly ran to the washroom to calm himself down, and a few ladies in the church surrounded him. They told him that he was being touched by Christ. That made him feel like he was being brainwashed, and he never went to a church again.

3) This Reddit user told that the priest she confessed her s-ns had s-x-ally assa-lted kids earlier and fled the country. She said that she felt like her s-ns were nothing when compared to the person she was confessing to and said that she didn’t want to be a part of a church that couldn’t protect its children.

4) Another user said that going to church only made her feel gu-ilty, so she stopped.

5) Another user gave a hilarious reason for what made her stop going to church. She said that they stopped giving doughnuts to the youth group.

6) Another user said that he and his wife regularly attended Sunday services and felt gu-lty whenever they couldn’t until the pe-do sc-andal happened, and ever since, they lost the interest to go to church but believes in Christ.

7) Another user said that the pastor in the church wasn’t preaching anything from the Bible but rather nationalism. Ra-ists and divo-cees were acceptable but not ga-y people or former in-mates which made him feel like the teachings of love were only applicable to some groups of people.

8) This woman said that she stopped going to church because she never felt accepted and was also bul-ied during a church retreat while in school.

9) Another user wrote that you don’t require a church to be faithful to God but be genuine to yourself and pray because the church would only be there when they need to collect your money and when you need help, they simply tell, ‘it’s God’s will.’

10) This user said that proof of Christianity was to be seen through its followers, and she saw no difference between the believers and the non-believers making her question its uniqueness.

11) Another user wrote that his church was full of tox-city where people who be-t their wives, ste-al and mis-reat their kids were considered holy merely because they attended church every Sunday which made him stop going to church.

12) One user wrote that her church kept questioning everything she did by asking, ‘what Jesus would do’ while they did the exact opposite of what Christ would have done.

13) This woman stopped going to church after she called out someone who made a s-x-ist remark, and the church authorities asked her to seek counselling.

14) This guy stopped going to church because the leader of the church forced them to donate 10% of their earnings fail-ng which they would not be allowed inside the church. He also said that the pastor tried to brainwash the youth.

15) This user wrote that he stopped going to church after he saw someone close to him worship God diligently and still lo-st his wife after years of suff-ring.

16) Another user wrote that she was stunned on finding out that the pastor she looked up to was che-ting on his wife and that it would take her some time to accept that before she goes back to church.

17) Another user said that he wouldn’t have been a Christian if not for him being born into a Christian family and then said that the only thing that makes Christianity look better than other religious groups was narci-sism.

18) Another user gave a funny response and said that not going to church would give him a few extra hours of sleep.

Marianne – I was pregnant with my daughter and someone in my church told everyone (including my coworkers) I was a pr-ostitute and the baby was from one of my johns. Because this person was from a prominent family, everyone believed her. I decided that day the hypocrisy of the christian church was not for me; I walked away and never looked back. Over the years many of the people who call themselves christians have confirmed that I made the right decision.

Christine – I was ostracized by my Church for leaving my vi-olent husband. Tried really hard for two years but felt that both my life and my sanity were in dan-ger. Eventually realised that my previously strong attachment to God had disappeared. Wasn’t much point hanging on after that.

Stacey – I was done the day we had a special prayer service and offering after Haiti was d-vastated by an earthquake a few years ago. The pastor got up and said that we needed to give & pray & help in any way we could because we were good Christian folk and Haiti is a doomed nation because of their ‘voodoo ways’. He said God punished Haiti for their sin and it was our job to bring the people of Haiti to the light.

Absolutely my last day at any church.

Jessica – When I was 6 or 7 I begged my mom and dad to take me to church, they finally gave in and took me. When we arrived the people wouldn’t let me sit in the church(unitarian? I’m not sure of the affiliation) with my folks but said I had to go to the Sunday school in the basement. I didn’t like being away from my folks and even more I didn’t like these strange people. So I was crying, the Sunday school people didn’t get my folks, nope. They took me to a closet and put me inside and left me locked inside till the end of services when my folks came to get me. Yeah, that was the last time I asked to go to church. I did have to go a few times with my ex husband’s family(catholics). That didn’t go much better. Edit: since religion was important to my ex’s family, I called their church after we got engaged to see what I would have to do to get married in the church. They looked up the family and since the family had not been tithing regularly they would not even talk to me. That confirmed everything I had learned about churches in my life.

Michelle – I was always told I should go to church and Sunday school, read the Bible for an hour after school and pray every night before going to bed.

As a young child. As a young adult I saw through the shenanigans and thought well if I can pray at home and read the Bible at home then why couldn’t God just let me stay home. At 15 I got interested in the Salem witch trials and found out it was a power hungry male dominant society that used religion to k-ill those people and I stopped going to church. Plus I found out my true religion is Wicca. I pray at home, I give offerings and protection to the Earth and I don’t have a collection plate being jiggled in my face.