Adorable Video Shows Rapper 50 Cent Cheers On Little Girl Who Strolled Up And Asked Him To Watch Her Swim At A Hotel Pool. – Video 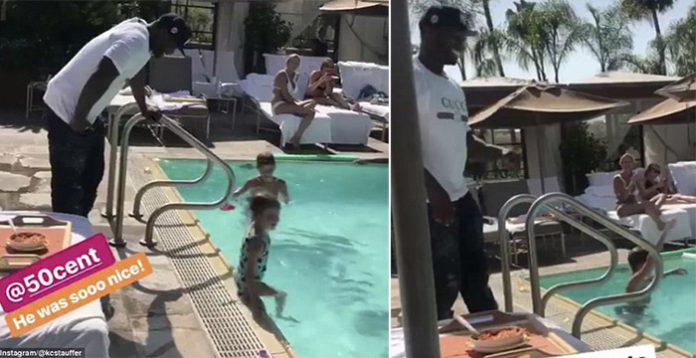 Mila Stauffer is a YouTube and social media personality. She is famous for her notorious and funny videos on YouTube and Instagram. She belongs to the Stauffer family and can be seen on her mother’s Katie Stauffer YouTube videos. One of her perky incidents that went viral was with 50 Cent the rapper.

The precocious kid once met 50 Cent at the four season hotel in Beverly Hills. Mila strolled up to him and asked him to watch her swim without floaties. The rapper too agreed to the toddler demand. 50 Cent is a rapper and actor based out of the United States He is well known in the hiphop industry. 50 Cent stood near the edge of the pool and watch Mila slide into the water.

The big man cheers the toddler as she swims in the pool. Mila’s mother filmed him cheering for her little girl. 50 Cent watch Mila puddling to her elder sister, Kaitlin with a big smile on his face. Later than the big man also took a snap with Mila, with her hand resting on his.

Katie states that it was Mila’s 1st day of swimming without floaties. The great man silenced the whole pool to watch her swim. Mila is known for her sassy rants on Instagram which include everything from gym-goers, vegetarianism, and Cinderella Castle at Disneyland “Sham”.

All her videos are filmed by her mother and her father Charley along with her eldest sister Kaitlin. Mila also has a twin sister named Emma and two brothers Charles and Finn.

Zenola – Very smart man he is not touching that girl at all she’s touching him.his hands are in the right place

Williams Johnson – She didn’t see color… Thank you 50 cent for being you and true pure hearted gentlemen….

Jenine – That’s a true Gentleman ! I’ve always liked 50″ I would of done the same thing for Mila!

Happy for you Mila.

Kirk – This is nice…now let’s see if he can treat people with special needs with any kind of respect…thats a video id like to see!

Ericka – Everyone has good and bad in them! He’s just showing her a lil love, it’s a sweet gesture.