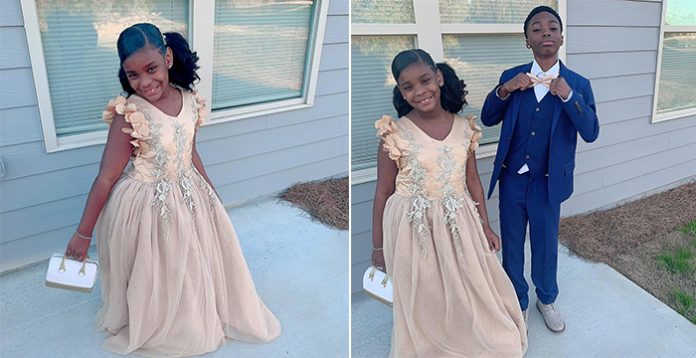 An elder brother came to the aid of her 7-year old little sister, Skylar, when he found that their father is missing during the night of the father-daughter dance. Trelysia Hamerter, Skylar’s Mom, shared a post expressing her despondency over the absence of her daughter’s father on the night of the dance event.

This is the second year that my daughter’s father failed to stand up for the daddy/daughter dance, she wrote. The grief-stricken Mom further continued expressing sadness over her inability to do something for her daughter as she is not ‘male’.

Skylar was looking forward to the event because she wanted to prove to her classmates that her father was part of her life, Hamarter wrote in the post. In accordance with the post, Skylar was eagerly waiting for this event and really want to share some good moments with her father in front of her classmates. This year, she went to her Mom earlier than expected and asked her to make sure that her father is available during the event. I don’t want grandpa. I want my dad, I want everyone to know my dad, Skylar implored her Mother.

According to Hamerter, Skylar’s father stopped answering phone calls a few days before the event. In due course, it became evident that the father would miss the dance event and there would be no one to dance with Skylar at the event. Skylar’s elder brother, Christian, was noticing what was all happening around him. He took note of the reason for her little sister’s sadness and took the decision to take the matter into his hands. Christian decided to join her 7-year old sister, Skylar, at the dance event in lieu of their father.

He stepped in because he wanted her little sister to feel special and make her realize that she deserves the man who keeps his promises, Hamerter wrote in the post. Seeing the sense of empathy of elder brother towards her sister, the Mother literally cried that day, Hamerter wrote on social media. She was impassioned seeing the tenderness in the boy’s heart for her sister. Hamerter felt delighted that day, and at the same time felt very proud as a mother, as she is raising a son who understands the woman’s heart. She was convinced that she is raising a son who will not only become a great man but also a Great Husband one day, she added in the post.

Brenda – congrats on these young siblings a partner for life …he will be a great future father a true definition of a man future husband father she’s one lucky young lady to have a wonderful brother .

Teresa – To the mother of these children you’re doing a fantastic job you are raising your children to be held accountable.

I commend you. It’s wonderful to see children problem-solving at this early age you have done well with them. They are going to go far in this world

Kimberly – We cannot control people’s bad behavior, but what we can do is just what this little boy did. Make lemonade out of lemons. Move on and I’m sure she had a better time with him anyway.

Eric – first of all God bless this young man with a big heart. Secondly she does not have a “daddy” that title is earned . He is her father by birth but that pretty much sums him up. Although I do not know his whole story this is what I see. Mom you are raising a fine young man. you are blessed.

Richard – Well at least there is one man in the family. God bless them and Skylar with a brother like that you don’t need a dad!

Connie – You obviously are not your Father’s Son you are an Amazing young man . Keep being a positive example of what a Real man does Steps up !!

Gerri – You set an example of how siblings should act. Unfortunately there are not too many that cared like you did.

You are a Terrific Brother. God Bless