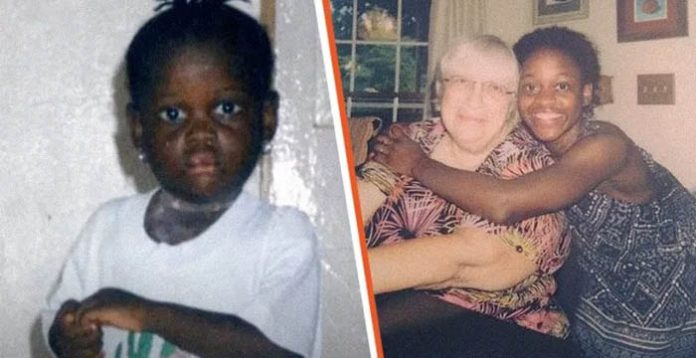 Life has become a nightmare for one little girl born in 1995 after she lost both her parents. She had to face various difficulties and overcome several hardships while she stayed in an orphanage. Luckily after four years her life was changed. Michaela DePrince had gone through intense pain and suffering at a young age.

The struggles and challenges that she faced in life were not even known by most people. At a young age, the little girl saw no hope or reason to survive.

This was mostly because of her Vitiligo skin condition which had white spots all around her neck. This eventually gained her insults and cr-itics from her local community in Sierra Leone. She was mocked and told that no one would accept her as their own and she had no chance of getting adopted. Deprince states that she was labeled the Devil’s child and she herself started thinking that she was a mon-ster while she was in an orphanage. She said, “They used to rank us in the orphanage, number 1 the favorite child and number 27 the least favorite… and I was number 27.

She has slept many days with empty stomach and everything around her seemed hopeless. But it was until one day when she came across a ballerina photo in a magazine. She was fascinated by the photo and wished to be the beautiful and happy woman in the photo. Deprince shared: “I was fascinated not just because she is a ballerina. Actually, it was because she looked happy. And I also wanted to be happy like her …. If ballet made her happy, then that’s what I wanted to do.” A small seed was planted and it transformed her life forever.

Finally, when she was adopted by an American family in 1999, she immediately told them that she wanted to dance. Deprince adoptive parents had already lost three kids and we’re excited to have Deprince in their lives. In the beginning, Deprince struggled a bit to adjust to the new circumstance but eventually with the love of her new parents, Elaine DePrince and her husband she started loving her life again. Her new parents showered her with love, they took her dance classes and helped rebuild her confidence.

Her entire life was only filled with rejection and disappointment but the love of her new parents made her realize that life has several other lovely emotions and she was very grateful for that. She said, “I often sleep with my lights on. I was just afraid that if I turn the lights off I would wake up in the orphanage again.” As time passes she settled with her new family and began working hard on her dream of becoming a ballerina. She states, “the only way I could live was … to prove everyone wrong.”

As she began her dancing journey, she came to know that her skin tone was an issue for some people. Furthermore, she was also insecure about her appearance and was anxious that people would make fun of her. With all those concerns she felt a bit low at the beginning of her dancing journey. But this time her adoptive mother was by her side she said her white spots are like pixie dust that does magic. Gradually her worries turn into confidence.

Now, she graciously danced on stages worldwide and prove everyone wrong. Her story is an inspiration to millions of people out there who hesitate to step forward to work on their dream. She encourages people to keep dreaming regardless of their circumstances. We cannot always assure that parents would complete their duty of caring and nurturing their kids. In most cases, children end up in foster care or orphanage due to some unlikely incidents and circumstances. These children always longed for a family and wished they would be adopted sooner or later. A teenage boy, Randall also needed a loving family after being ab-used.

Luckily, a couple from Texas took Randall into their family. Casey Douglas and her husband were looking for a child to adopt and in 2017when the caseworker told them about Randall, they immediately decided to adopt him. After two years the adoption was official. Michaela and Randall are very grateful to their adoptive parents, they have showed them what real love feels like and presented a whole new life to them.