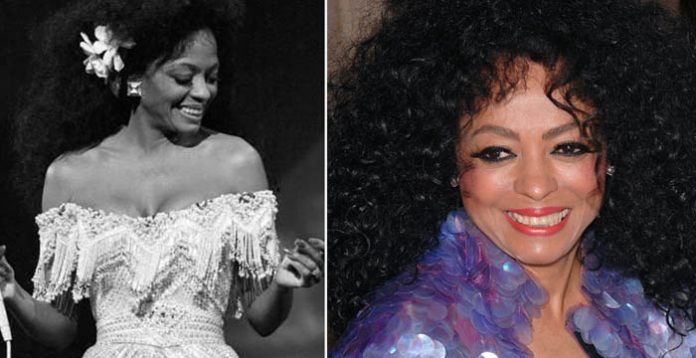 This article is about an emotional story of the legendary Diana Ross, her name is always associated with the music industry without any showbiz. She became a superstar with her talents before reaching her adolescence and now, 76-year-old Ross looks as beautiful as she has ever been. During the ’60s, Detroit-born Ross was a member of the pop/soul trio, the Supremes.

And at that time, the trio became Motown’s most successful act with the best-selling girl’s band. Songs like ‘You Can’t Hurry Love’ and ‘ Come See About Me’ are to date counted as the most popular songs.

The girl’s group was even compared with the “The Beatles” The Supremes were important guests on The Ed Sullivan Show and they showed up more than 16 times. Many believe that it was ED who helped them to gain mainstream attention and fame. In 1969, Ross declared her single career which heightened the success of the Supremes. Throughout her career, she never failed to give outstanding songs which topped the charts in countries all over the globe.

Born on March 26, 1944, in Detroit, Michigan. When she was a kid, she showed her interest in music and since then she knew singing was her calling. Surrounded by many skillful people she became friends with the likes of Smokey Robinson and Aretha Franklin.

Her way toward Hollywood

Her charming personality offered her to star in the movie called, Lady Sings the Blues which apparently earned her an Academy Award nomination for the Best Actress. After that, she appeared in many movies like Mahogany in 1973, and The Wiz in 1978. And in 1980, she released her album called Diana. The amazing tale was written by Neil Rodgers. At the time, Neil Rodgers said: “I thought, ‘Wait a minute. If I write a song for Diana Ross and talk about a disenfranchised part of her fan base and sort of making it for them, this would be an important record,’”

“No one thinks of Diana Ross necessarily on the frontlines of this, but community and her fans love her and idolize her,” he added. For her amazing songs, 12 times she was nominated for a Grammy Award, however, she didn’t win any. But she was awarded a Grammy Award for Lifetime Achievement in 2012. Ross was even honored with the highest civilian honor from President Barack Obama, the Presidential Medal of Freedom in 2016. And in 2017, she achieved Lifetime Achievement honors at the American Music Awards.

Among other celebrities who took inspiration from her, is Oprah Winfrey, who spoke of the musician. “Just wonderful, for me at the age of 10, watching The Ed Sullivan Show on welfare, there is no chance that I won’t be singing and seeing her for the first time in a civilization which included no Black people on television.” “When you first see somebody on television like Diana Ross, who was glamorous and beautiful and represented literally possibility and hope—it was life-changing for me,” said Oprah Winfrey.

Married twice and has five kids and all of them are connected to show business.

However, Tracee, her daughter, was actually the biggest celebrity of them all. Tracee always wanted to become a singer like her mom, however, the thought in mind that people will expect her to cross her mom’s success suppressed her. Talking to Oprah, Tracee, who won a Golden Globe for her character in the TV series Black-ish, shared the heart-warming moment. When her superstar mother heard her singing for the first time, Ross told her that, “it is one of the most precious moments in my life.” Tracee shared the story: “She came out of the house, came out of the garage, got in my car, closed the windows, and I was, like, ‘Okay, here it is, mom, here’s me,’” she said. “She pushed my arm and she turns to me and her face was covered in tears. And told her, ‘Finally.’”

For many years, Ross has been living in the fashionable Belle Haven district in Greenwich, Connecticut. In 2006, she bought this 1920’s era mansion which is enormous, consisting of 11 bedrooms, five fireplaces, six bathrooms, a pool, a hot tub, and two apartments. Some years later, she put the mansion up for sale for a whopping $39.5 million. Greenwich is among the most wanted places to have by celebrities. Ross also has another mansion in West Hollywood.