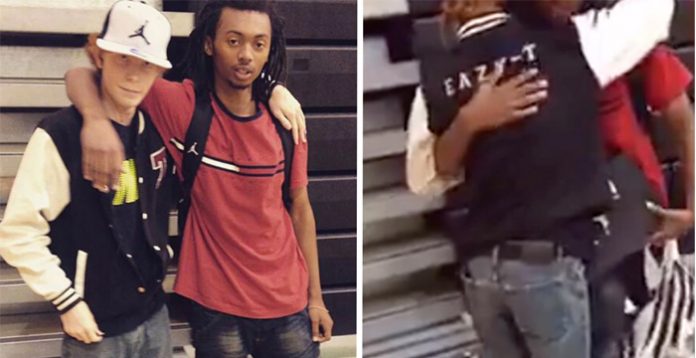 The heart-melting video of the special delivery went viral on the internet as a South Carolina student gifted his classmate a pair of Air Jordans – the video ultimately gained more than 200,000 views. Tae Moore, a student of Greenwood High School, posted a video on Social media which showed him giving the new shoes to his classmate Taylor Bates.

He bought Nike Air Jordans for Bates after he was being intimidated by his sneakers. In the viral video, a boy is walking into a school gymnasium in the U.S. wearing an Air Jordans cap when he is approached by another student.

The boy then presents shoes in a box to him.

“For real?” the first boy asks as he looks at the shoes. “Yeah, bro. I bought them for you.” A girl watching this: “I could sob right now. He is so sweet.”

Both the boys shook hands as Bates tried on his new shoes. Later, Bates wrote on his Instagram while thanking Moore for his selfless effort. Bates’ appreciation post reads: “He said,’ I heard people have been oppress you, so I wanted to get you these to make you feel better, and when he said that I hugged him and almost got into tears, and I cannot thank him enough.”