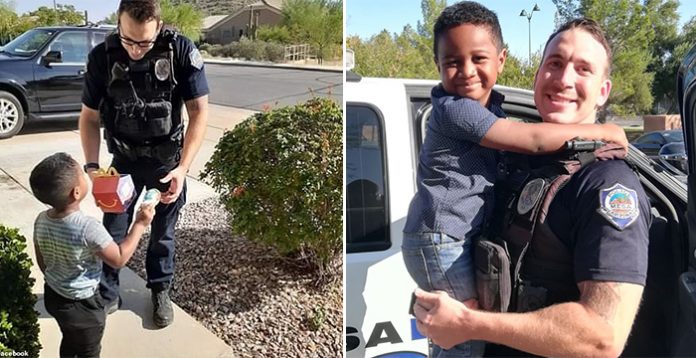 Officer Randolph Scott Valdez of the Mesa Arizona, law department got a call from Charlie, a 5 year old, preschooler. For Charlie, when he called 911, it was an emerg-ency as he wanted to have a McDonald’s happy meal. Charlie was not aware that officer Randolph would come over to bring him his favorite meal.

When Charlie called 911, he asked “Hi, is this McDonald’s?” When the person on the other side asked if he was facing an emerg-ency , Charlie requested that he wanted a McDonald’s happy meal And then Charlie hung up.

Charlie’s mother, Kim Skabelund, says that her family was getting ready for a Halloween party.

That’s when their phone rang. Kim was not aware that Charlie had called 911. Kim said she and her family was “sho-cked and kind of embarrassed.” The dispatcher from 911 called and said that they would want to speak to Charlie’s dad. Even though Charlie had made an innocent call and requested for a happy meal, as a protocol, officers at 911 had to make sure Charlie was safe. The officer came to check on his welfare.

When Charlie met the officer, for a few moments he was shy… Later when officer Randolph gave Charlie his happy meal, they both became buddies. Charlie shared his happy meal with his sister. Kim told CNN, “We were so appreciative of how Officer Valdez handled the situation.” She further said “He taught Charlie a valuable lesson that day not only how to use 911 appropriately, but also how to treat others with love and kindness.”

Chrissie – This kid called 911 for McDonald’s because it was the only number he knew.

And he got his happy meal from the officer. What a legend

Worley – Bless that station and the officer for allowing the little man to get his happy meal. Great way to educate our kids when they goof up. Definitely impressed.

Esther – Bless him. I’m glad they still came round to check. That was important. So nice of them to actually bring a Happy Meal & talk to him

Sara – I know this initially was a waste of resources but, this kid was TOO cute NOT to bring him a happy meal! I really have to say how nicely this situation was handled!

Deltz – He so sweet and adorable, he’s just too young and didn’t know, hopefully this thought him a lesson