‘I Love You,’ He Mouthed. Then He Was Gone. I Could Barely See Through My Tears.’: Woman Details Military Whirlwind Romance, ‘I’m Proud To Stand By His Side As He Serves Our Country’ 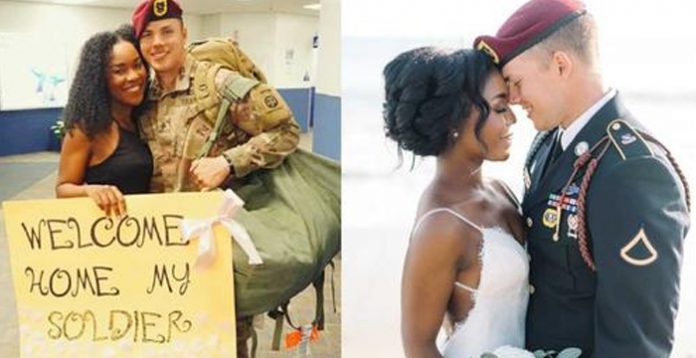 Woman Talks About Her Military Whirlwind Romance And Is All Praises For Her Partner Sierra first met Sean at their university cafeteria when she was searching for a seat. Sean was wearing a polo shirt tucked into a khaki, and although he recognized Sierra, she didn’t. They were colleagues. He approached her and told her that it would be easier to find a table if they sat together and the both of them had their lunch together that day.

A few days later, Sean sent her a friend request on Social media, and they became friends on Social media. They spent hours chatting and very soon became good friends, and that’s when he asked her out one day, and she agreed to hang out with him. A few weeks passed, and one fine day, Sean showed up at Sierra’s house with a single multicoloured rose and asked her if she would be his girlfriend, and she happily agreed.

They made sure they celebrated every moment, and as time passed, they got stronger and fell deeper in love. Things were going great, and Sean decided to propose Sierra. He first took her out on a limousine to a rooftop view of the river.

He walked her into the song, You and I by John Legend, and while they were having their dinner, you whispered to her that looked beautiful and went down on his knees. Of course, she said yes. After college, Sean left to serve in the army, and Sierra started working as a nurse. Sierra spoke of the last night they spent together before he shipped out.

They were emotional and had no option but to accept the reality and were aware that things would now change. The next morning, Sierra dropped him off at MEPS and proudly stood there witnessing him taking his oath and then opened her arms wide to give him one last hug. She controlled her tears but after he was gone, she couldn’t take it in anymore.

She didn’t want anyone to see her so, she took the stairs instead of the crowded elevator and finally managed to gather some courage and drove back home. She knew she had to stay strong. During their time away, they wrote each other letters, and throughout the training, although there were times it got hard, they pulled through and survived.

Finally, on graduation day, she got to see Sean after what felt like forever. He looked so rugged yet handsome. Sierra was so proud of him and ran to embrace him. However, their celebration was short-lived. He was deployed far away, and they had to part ways again.

During their time apart, they wrote each other letters and sent gifts, and one fine day, Sean told Sierra that he wanted them to get married. They married three days after his return. Sierra described their wedding to be ‘perfect and magical.’

Sierra also said that now she’s learned to appreciate every little thing about her man and although being married to a soldier is emotionally diff-icult, she is so proud to stand by his side as he serves his country and is so excited to face all the adventures that come ahead together.