Single Man Who Grew Up in Foster Care Adopts Three Boys: ‘I’m the Father I Wish I Had Growing Up – Video 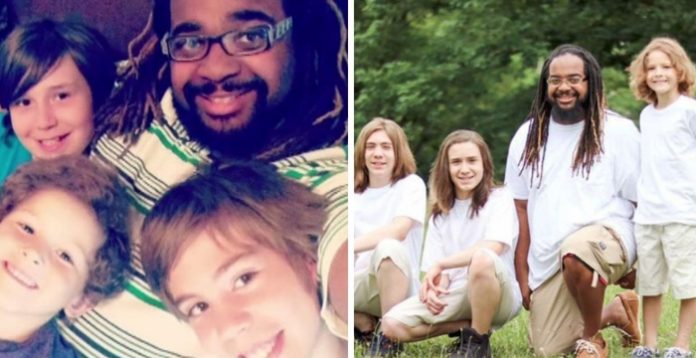 Barry Farmer, a 34-year-old man, who himself grew up in a foster home had adopted three boys since 2011. Having grown up in foster care, Barry understands the feeling of getting dislodged. Barry’s parents proved to be impuissant when it comes to taking care of the child. The then 5-year old Barry was looked after by his Grandma.

Soon he found his loving family and established a close-knit with them in a short span of time.

Inspired by the compassion that he has received at a tender age, he decided to become a foster parent. He contacted the local agency, registered himself as a single foster parent, and received an official license to foster ab-andoned children. He first became the foster parent of a 16-year old boy who lived for six months at his home. Soon after the teenager left Barry’s home Barry received a call to either adopt another teenager or a 7-year old boy.

This time Barry decided to go for a 7-year old kid as he believed that the relationship with the sweet little 7-year-old kid would be more interesting. “I was totally uninformed about the child’s name and had an impression of him being Bl-ack,” Farmer reminisced. However, my presuppositions failed miserably when I first met that 7-year-old pickney, Jackson. He was white, and I had never fostered a white child before. “Owing to our physical differences I was irresolute regarding adopting him. However, on the flip side, I was thinking to foster this child as I find him riveting,” Farmer recalls.

Barry fostered Jackson for around 6 months ensuing establishing a paternalistic bond with him. Jackson left Barry as he was supposed to be adopted by another family. This made not only Barry feels discomfort, but also Jackson. They both miss each other. Barry, in the wake of, having an incessant fatherly bond with Jackson, wants to spend his whole life with him and decided to adopt Jackson. Soon after finalizing the adoption of Jackson in 2011, Farmer started giving thought to extending his family as Jackson would need siblings.

In 2013, Barry adopted then 11-year-old Xavier, and a year later, he welcomed a 4-year old boy Jeremiah, who was finally adopted by Farmer in 2016. Barry is now 34 and has three boys in his family. “I am very appreciative of myself because of the sense of fatherhood manifested in me which I could have never imagined in my life had I have not adopted three cheerful boys,” Farmer says. “We eat together, play together, and share all sorts of things with each other.

This is one of the benevolent gifts I could have ever received from God,” Farmer added.

“I want the people of America to come forward and foster homeless children out there. It is of paramount importance that we become a tower of strength for those helpless children who are orphans or are ab-andoned by their birth parents. My only wish is that no children in America had to live without parental support,” Farmer asseverated.

Pauline Webster – God Bless you and your family.

Catherine Ward – I know the boys are very happy to have a dad who really wanted them.And God blessed him for wanting to do it.

Mary Farr – How beautiful is his heart. He gives to others, in this case to children, that which he didn’t have himself.

Jessie Mahlasela – He knows how growing up without parents feels like hence he gave these boys a perfect gift, a home and a parent to look after them. Big up to you man and abandunt blessings coming your way.