‘She Was Sitting In A Shelter With No Place To Call Home. A Teenager, She’d Already Given Up On Being Adopted. Then I Received A Text: ‘Hey, Autumn. You Still Interested In Foster Care?’: Couple Adopt Teenager From Foster Care – Video 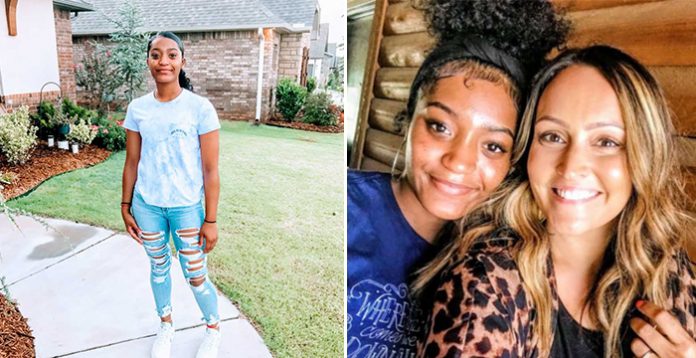 Autumn Moore, a mother of two girls has always been interested in fostering because her heart was with teenagers, but she was hesitant as she already has a younger child at home. It is a common fear in fostering parents, about how teenagers would influence their child. But later she understood that teens are teens and they are not scary.

They are just older kids who need love just like younger kids. She spoke to her friend in church, who also worked at a teen shelter. She told her that if she even had a teen girl and if she felt that her house would be a good fit for her, then contact her.

Later in about 8 months, one day she received a text from her friend from church, “Hey, Autumn. Are you still interested in foster care? Remember when you said to let you know when I thought I had someone who would potentially be a good fit? Well, I think I have someone”. The teen’s name was Mara. Autumn Moore has a conversation with the caseworker and heads out to a conference at Rachale Hollis. At the conference, she was asked to write down her goals and dreams of life.

At the top of the list, she mentioned fostering. She has always wanted to foster children.

Autumn Moore believes that every child deserves to be cherished, loved unconditionally. The whole weekend Autumn was thinking about Mara, having no place to call home. Autumn knew that she just needs to welcome Mara into her home and heart, but the only obstacle was her husband, Josh. They had a conversation about it a lot of times in the past and even gone to speak with an agency so they could learn more about the process. Autumn Moore said, “I felt it was my calling. He felt it was not his. I truly believed in my heart, though, that if God gave me this man to call my husband and also gave me this calling, tugging on my heart almost daily, that a way would eventually be made.”

A few days later when Autumn Moore arrived home from the conference, she attended the church. The church used to have an annual series each summer known as “At the Movies”, in which the pastor would take a movie and show its snippets for creating a theme and message of that particular weekend. That weekend pastor used the movie “Instant Family”, which was about adoption and fostering. Autumn Moore has already seen the movie, so as soon it started she started sobbing. Looking at her, Josh realized that Autumn Moore is convinced about fostering and therefore, decided to start the fostering process.

Six days later, Autumn went to the shelter for the first time to meet Mara. Mara seemed nervous and yet excited. They both sat in Autumn’s car and she asked her to share her story, about how she ended up in the shelter. Mara had been to many different homes and in her 16 years of life, she has experienced many different things. Autumn said, “I listened as she picked at her cuticles while she spoke.

She and I share that same nervous habit. I hurt for her. I wished she had never endured so many of the things she had in her young life…I remember stopping Mara in the middle of her story. I needed her to know we already wanted her as part of our family. She was already chosen.”

When Mara was 12 years old, her parents permanently lost their parental rights and Mara could be legally adopted by another family. When she was 17 years old, the decision to be adopted was completely up to Mara. At this point, she had envisioned that she is aging out of the system, therefore she had completely given up the hope of being adopted. Fostering is indeed messy sometimes. A family needs to bring a child into their home, who has possibly called many different places their ‘home.’ They’ve experienced many different parenting styles and their rules. Every family has their views, family and cultural norms, religion and the foster child has to adjust with it every time they switch their homes.

It is hard to even imagine having to do that once or twice, but unfortunately, some kids have to do that even 20, 30, 40, 100 times. Mara also had been to various homes before Autumn’s house. Autumn added, “Our decision was not based on what she told me about herself that day. God had already shown me that this beautiful, brown-eyed girl was supposed to be with us. We had a good cry that day together, and I walked off knowing I was capable of loving this girl in the same way that I loved my other two girls.” Three weeks later, Mara arrived at Autumn’s home along with her belongings.

Autumn said that the first week was a little strange. Mara could easily fit in the home and with the family and they got along all fine. But they were still strangers, so it was not completely comfortable. As time progresses, it became normal, later Mara got a job and was doing well in her school as well. She made new friends and eventually she got her car, license and permit as well. At the dinner table, it would become comedy central as Mara and Autumn’s daughter Kaylee would start cracking jokes every night. The family loves to laugh and can become sarcastic too at times, so Mara could easily fit right in. Autumn said, “She is like the queen of fast comebacks—the girl makes me laugh with her incredible wit!”

Later, on a particular day, while eating on the table after a softball game of Autumn’s youngest daughter, they eventually started joking like always. Autumn saw Mara from a side view mirror, laughing hysterically, that’s when she realized that this is what she always wanted and is the new normal.

She could not even picture Mara not being there with their family and their lives without Mara. In 2020, when everyone was having a difficult year due to Cov-19, and everyone has to endure so much, it was a time when Autumn’s family went from four to a family of five. Staying at home they grow closer to each other.

Soon Mara will be 18 years old. Currently, she is working ahead in school and would graduate a year early. She is working and is budgeting for at least 6 months. She decides to move out and attend college in the fall of 2021. Mara wants to help other children like her in the future. Mara tells Autumn that she will visit her at least once a week because she will miss the family. Autumn is sad to see her go but excited to see her independent. Autumn wants to continue fostering children and improve the foster care system generally. She said, “I believe we can do so. much. better. Not only for the youth in our system, but for the biological parents of these youth that are most likely a product of disturbing childhoods they never healed from themselves.”

Joan – Great story sad she didn’t get out earlier she seems like a good kid and a good fit. Kind of looks like she could be tours biologically. I never followed a story but I need to see the journey. God bless…

Jerry – Beautiful story and beautiful young woman. I hope that ALL of her dreams come true! Deb Jerry Abramson

Bonnie – I wish all of the foster homes were like yours…so many children need loving foster homes!

Alice – I wish all foster families were like yours! God bless you and your beautiful family

Carol – “for us to gain her, other people had to lose her.” Ugly crying here.

Rob Keogh – How wonderful that you all found each other, it was meant to be.