The 38 Daring ACM Awards Red Carpet Dresses Of All Time 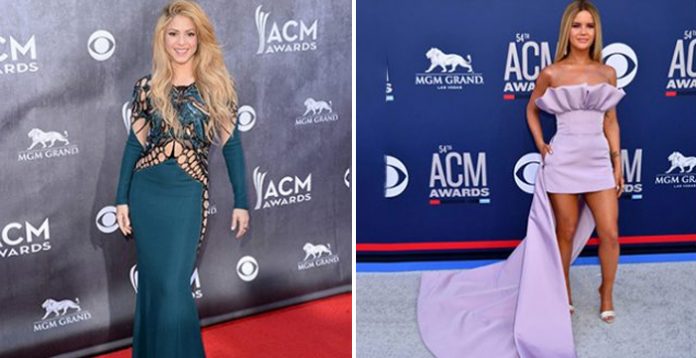 The Academy of Country Music Awards is an event that provides opportunities for celebrities to celebrate the greats of country music, however, it has also shown us unique get-ups of celebrities as they walk in, in their most glamorous dresses ever imagined. Meanwhile, there are always classic looks, many celebs use these types of award shows to wear dresses that are most interesting and daring at the same time.

These are some of the most inspiring looks from the ACM Awards throughout the years.

The winner of American Idol shows off her stunning legs with this impressive sequined dress.

She was wearing a variation of a classic dress showing a plunging neckline and bejeweled embroidered lime green designs. She accessories with lime heels and a thin gold belt.

She glammed the event in her neon green Alex Perry gown which features a thin neckline.

She appeared in a pastel Christian Cowen power suit look. She was wearing a jacket without a shirt. Both her pants and jacket sleeves flared out beautifully.

Like always, she showed off her toned legs in this Nicolas Jebran dress at the 2019 ACM Awards.

In 2019, she wore this incredible, silky Christian Siriano dress. The short dress features a long cloth at the back and a beautiful ruffled design at the top.

In the 2018 ACM Awards, she wore this peacock-like Uel Camilo. The sh-eer sides add conspiracy to the already visible gown.

In the 2018 ACM Awards, she wore the Aadnevik gown featuring a corset top and a billowy skirt with startling wavy edges.

In the 2018 ACM Awards, she was seen in the golden sequined dress showing her back. Her dress entirely matched her blonde hair.

At the 2018 ACM Awards, she wore a red dress, the top part was shiny while her dress was a plain skirt.

She brightened up the event with this sunny Christian Siriano dress. The turtleneck form-fitting long-sleeved top was perfectly balanced with a skirt.

In 2018, she was seen in this J. Mendel dress. which was the form-fitting velveteen dress.

In the 2015 ACM Awards, she was seen in this plunging neckline. Also, the chevron shape added a geometric element to the dress.

In the 2017 ACM Awards, Chrisley was dressed in this form-fitting sh-eer dress.

In the 2011 ACM Awards, she was seen in this stunning halter neckline Randi Rahm dress.

She appeared in a beautiful white top perfectly balanced with a black long slit skirt from J.

She wears a loose-fitting strapless dress that features two long layers of the billowing back.

She was wearing an Alexander McQueen dress that comprises a small black dress with a long-sleeved.

She was dressed up in this classic Randi Rahm dress in a neutral tone.

In the 2015 ACM Awards, she wore this hot pink color dress and she accessorized with a black and silver clutch.

In the 2017 ACM Awards, she was seen in this adorable black dress which has overlay layers with beautiful cherry blossoms decorating the dress.

Her body-hugging dress had a geometric circle pattern. She accessorized with a similar geometric clutch.

The form-fitting black dress’s defining feature is a sh-eer, ruffled top that broadens down to her arms and directs into the sleeves decorated with branches.

The form-fitting teal dress starred courageous cutouts throughout the h-ip-line and shoulders, setting a look of a butterfly.

She appeared in this baby pink which stars a high slit and perfectly ruffled collar from Parabal Gurung dress at the 2018 ACM Awards.

She wore this stunning BCBG Max Azria dress to the 2013 ACM Awards. The black geometric dress accentuates a halter neckline and designs that underline her figure.

Her love for a metallic dress was again seen in this stunning LaBourjoisie dress weaves jointly a sh*eer low peach tulle with bedazzled feather-shaped design.

She was dressed up in this stunning Max Azria Atelier dress. Featuring geometric paneling and is underlined with a luminous yellow belt.

In the 2016 ACM Awards she was seen in this Jeremy Scott Couture look that accentuates the classic country look with a modern twist.

Again Taylor Swift stuns in her simple yet elegant J.

She chose a snakeskin form-fitting L’Wren Scott dress with furry sleeve-straps for the 2011 ACM Awards.