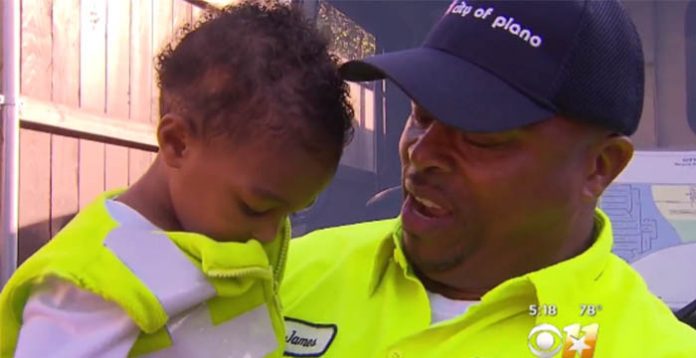 For many grown-ups doing cleaning work and taking out the trash may be a monotonous task. However, for this two-year-old boy, it’s the best day of his week.

Every Monday, Lance Rufus waits outside to welcome his hero and best friend James Jackson, who drives a garbage truck. For more than a year from now, both became friends. Now Lance even has his miniature recycling bin with a matching reflective vest.

The mom of the two-year-old toddler told KTVT, “It’s like, he’s eating breakfast he hears it, he stops and says, “Garbage truck!” We have to get him out of the high chair and run to the back.”

The original bins are twice Lance’s height. So, he pushes his miniature recycling bin to the border, happy to welcome his best friend James. Toddler loves his best friend so much that he even dressed up as James for Halloween by wearing his neon yellow reflective vest to resemble James’ uniform.

James, who has been w orking as a garbage collector for more than four years, also waits for the weekly visits. James shared with the station that he always wonders if he is going to be there again to greet him.

“It makes it all sweet when you see someone who really likes what you do,” he added.

James has also gifted his toddler friend a toy bank in the contour of a recycling bin which Lance loves and keeps like it is his treasure.