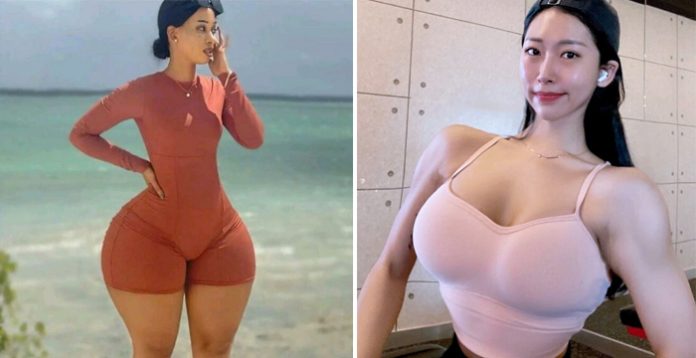 27 Hilarious Instagram Reality Pictures That Teaches How Not To Edit Your Pictures Hor-or movies aren’t the only things that can make you jump. People think they are the hot stuff in some of these pictures where they look like they came out of one. How do some people not understand that they don’t need to have perfectly white teeth glossy, clear skin, to be considered pretty?

1. This picture of a girl who photoshopped the entire picture, and probably forgot to hide the lines in the background warping will make take you by surprise.

2. This picture of a couple where the girl looked like a living barbie doll would make you wonder if the picture is even real

3. This picture of a woman who photoshopped her a—that it looked so unreal

4. This woman said her goal was to be a French doll and posted pictures dressed up as a French doll. Everyone believed it until they saw her in an interview.

5. Another viral picture where a woman removed her nose because it probably is overrated.

6. This singer looked nothing like her social media pictures when her fans saw her in an interview.

7. This Instagram story of a couple would make you wonder if the guy is clicking a picture with a doll or a real woman.

8. Well, people use filters. But this picture of a woman who went too far with her tone is sure to catch your attention.

9. This one picture where the hands of the person would have made anyone go, ‘What is this even?’

10. How about an Instagram page that charges for teaching you how to edit? Well, it does exist.

11. A viral picture showed this woman having edited her toe so big.

12. This 63-year-old woman’s editing skills went too far that she looked like a 16-year-old in one of her pictures.

13. This lady took her editing job so seriously that she sent a job application with her photoshopped picture.

14. This picture of a couple flexing their rings might be cute, but what caught everyone’s attention was how the girl looked with the filter on.

15. This influencer’s fans were stunned when they saw the video uploaded and the unedited version of the video.

16. This model posted a picture of hers. A few days later a Getty photographer posted the same picture, unfiltered, and you are not the only one who is going to be surprised.

17. This one couple might have posted a picture that looked cute. But thanks to their family members, they posted the same picture, but the couple never looked the same.

18. Opened an ad listing for a wig and thought it was a person with a b-d photoshop job, but it was a badly photoshopped mannequin.

19. This girl with Polish and Scandinavian parents shared pictures suddenly turning into a Brazilian that went viral.

20. These pictures of a model looked nothing like her which make people even wonder if their whole lives were a lie.

21. This photoshopped picture of a model went viral after which brands probably now know they need to check the pictures before uploading them.

22. Most guys are guilty of having done what this influencer did on social media – used photoshop to morph his face with a model’s six-pack abs.

23. This model’s picture would make you think, I could be wrong but, I don’t think that’s how upper thighs work.

24. This picture went viral after Posted vs. tagged were different persons.

25. This picture of a guy with his mother looked nothing less than fake with a photoshopped body.

26. This one picture feels almost satirical in its lack of awareness because of how obvious the skin tone filter is.

27. 75y old Dutch television personality left a recent pic on Instagram, and you are not the only one who would be surprised.