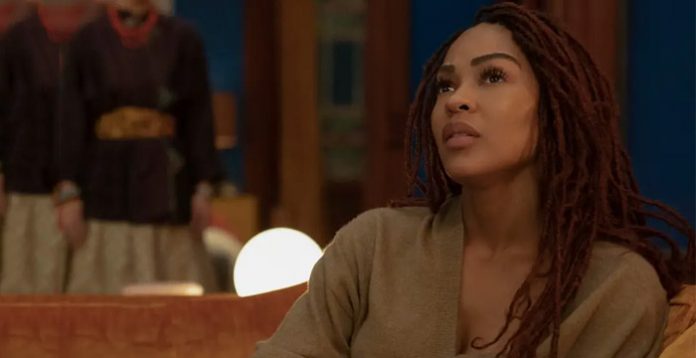 Meagan Good is often cr-iticized for the kind of characters she plays in movies and series. Meagan was in conversation with ‘Blackprint’, the Black Affinity Group at Meredith Corporation. She spoke on how she handles the cr-itics and remains focused on what she intends to do. For Meagan what is important is that she stays connected with “God”.

Meagan says that even though she has been in the industry for such a long time, she is often questioned if she is on the right path. She says the cr-iticism she faces from fellow Christians is not in good taste. She says, “Don’t at-ta-ck people, don’t abu-se people, even if it’s just with your words.

And also, make sure when you’re correcting that God told you to do that because sometimes you’re doing something that he ain’t asked you to do.”

For Meagan, she feels she has been given a talent by God’s grace on her. She says that God wants her to be useful in this world and this is how she is supposed to be. She feels over the years her relation with the almighty has grown. She says, “As I’ve grown and gotten older and grown in my relationship with God, one of the things I’ve realized is that I’m called to sometimes dark spaces because the only way you can light up a space is to go into a dark space and use that light. She further explained. “And for me, it’s about being transparent, it’s about being honest, it’s about being raw, it’s about living in my authenticity and moving as I feel led.”

Talking about her performance in “Harlem”, Meagan says, “This is a character that I haven’t [gotten] a chance to play. … The awkwardness, the wei-rd-ness, is more me than a lot of characters that I’ve played. Playing the character of ‘Camille’, an ambitious anthropology professor, in the series, she says, not many shows celebrate sisterhood and Black womanhood.

She says “I think for me, one of the most exciting things [about Harlem] was in a lot of those shows I hadn’t seen necessarily myself or my friend group. I think that a lot of women will see themselves in these characters who are trying to discover what they deserve and their self-worth.”

Polly – God bless you baby girl for all you’re doing and the way you shine your light in the industry for the Lord. Praying for your continued success with helping others. Sending you blessings from Decatur, GA

Fred – This is the problem I have with the church it’s become too judgmental, and because of this It’s lost sight of who it ministers to.

Michelle – Meg, I love your beauty, strength, honesty and humility. You are very classy and you have support. Keep doing you beautiful!

Adrienne – Love you Meagan. Church folks can be the meanest and won’t be heard. So glad you remained you and continue to draw others through love. Blessings!!