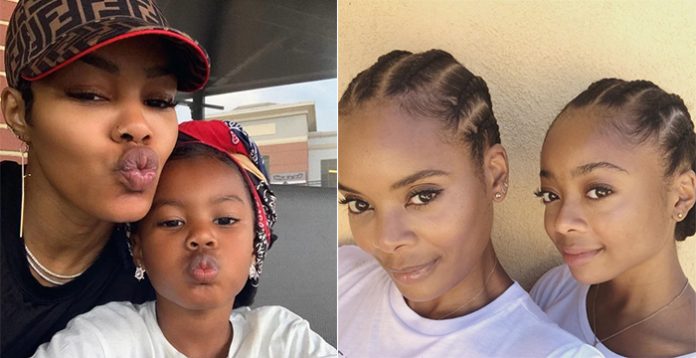 From vegan dream team Tabitha and Choyce Brown, to Bey and Blue, to Teyana Taylor and her mini-me, Iman Tayla Shumpert (AKA Junie), we rounded up the flyest of the fly girls and their baby girls. Keep scrolling to check out a list of the celebrity mothers and daughter who look so much alike we have to blink twice to tell them apart.

Actress Lela Rochon’s daughter Asia Rochon Fuqua looks just like her famous momma. For her prom, Asia wore this gorgeous vintage dress her mom once donned on the red carpet. So sweet!

Derreka – Woww.didn’t know she had a daughter she’s beautiful just like her mom

Terri – There’s about three mothers and their daughters do not look like their mother (in my opinion) but for the most part, these mom and daughter pics are spot-on. Beautiful women altogether

Alisa – The pic with Willow should have included Grammy as well. All three look alike. Jada looks just like her mom.

Sharisse – Wow!! Looks like Niecy Nash gave birth to herself