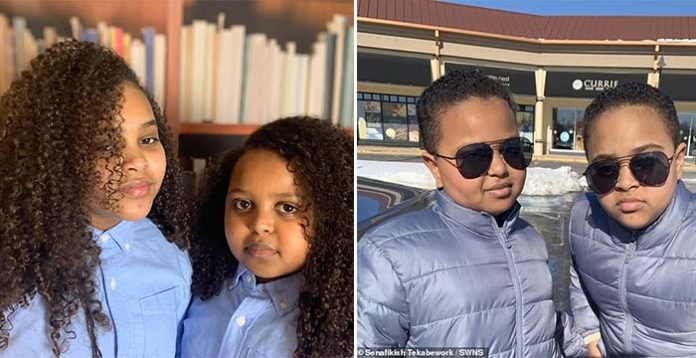 Two brothers from Pennsylvania shared their story on growing their hair for five years to donate it to a charity that makes wigs for kids who lost their hair. Kaleb Tekabework 11, and his brother Aaron, 9 from Philadelphia, Pennsylvania were motivated by a documentary in April 2016 where a girl donated a wig of hair to a young ca-cer patient.

Since then the boys decided to stop cutting their hair and donate it to charity.

The boys were just seven and five when they made this decision. As they started growing their hair, they were mocked by other students at school over their appearance. But despite all the difficulties the boys succeeded in growing their hair as long enough to donate it to charity.

Earlier this month their 19in tresses were cut off and donated to the charity Wigs for kids, which makes wigs and hair replacement options to children who lost their hair due to radiation therapy, Trichotillomania, chemotherapy, burns, Alopecia, and other sorts of medical issues. Not only that the brothers have also raised $3,415 for children’s ca-cer research at Addis Ababa University (College of Health Sciences).

Kaleb said, “Growing our hair for nearly five years was tough because everytime we swim our hair would be tangled and we have to spend hours to untangle it again.” “And we have also gone through a lot of teasing and b*llying at school. But it gave us the chance to explain why were growing our hair.” ‘I often remind myself why I’m going my hair. No matter what I just keep going to accomplish and achieve my goal.’

The boy’s mother Senafikish is a nurse, she recollected the moment her sons started growing their hair, she says they were inspired after watching the documentary and asked if they can also grow and donate the hair like the girl they saw in the documentary. ‘I told them it is possible and in no time they decided to do it. Since then their hair has been not cut and is taken care every day.’

All these years the boys have been going through several difficulties like extended showers, putting up with b*llies, and taking longer time to brush. And finally, the boys had 19 inches long hair just enough to make the donation. Senafikish said, “Every week I had to wash their hair, and every day I had to groom their hair for school. It also becomes difficult to brush the hair as it grows longer and longer.

For the first time in their lives, Aaron and Kaleb went to the barbershop on Feb 4, World Ca-cer Day, and finally had their hair cutting ceremony and donated it. Aaron said, “We got a haircut before but it was the first time in a barbershop so we were nervous but it was pretty fun in the end.” “We bid goodbye to our hair and took a picture saying I’ll miss you!”
The charity Wigs for kids allows them to track the hair and where it finally ends.

He also added, “I want to meet them in person and see them smile, it was the only thing that I’ve been thinking for the past four-and-a-half years.” The boys have also planned to donate more hair but before that, they are going to try some new hairstyles. Kaleb said, “I’m going to probably pause for one or two years, I just want to try some trendy hairstyles as I have been wearing only the ponytails for all these years.” “Now we look like boys!” Aaron added. Senafikish is very proud of her sons’ determination. She said, “Our sons inspired us, they are willing to give part of them to someone who is in need.

It was a thoughtful act of selflessness and charity.”

“We were also amazed by the fact that the boys didn’t give up on the decision even after referring them as girls mistakenly. They explain the reason for growing their hair only when they are specifically asked.” They know what they were doing and why they were doing it. Despite all the pain of grooming hair every day and putting by with the b*llies, they are determined to achieve want they wanted. Their motive was to bring a smile in someone, they don’t know. It is the very essence of life acting from the bottom of your heart just to make someone else happy.